Electric scooters have risen enormously in popularity in the last year and are now considered a convenient method of transport. More and more people are opting to use scooters to get to work in the mornings or to move around towns and cities. The benefits of these scooters are clear: they are quick, cheap to run and can be folded and carried around easily.

We must admit we loved the idea of zipping about town with minimal effort, no need to circle round for parking etc. But the speed of some of them did have us concerned and a friend of ours already picked up a 200€ fine!

New regulations have been put in place by Spain’s Directorate of Traffic after drivers, pedestrians and policemen complained about the dangerous practices of some electric scooter users.

Now, after thousands of complaints and accidents, Spain’s Directorate of Traffic has announced a series of temporary regulations that electric scooter users must comply with. The regulations are standing in until new laws in line with the European Union are passed.

Sub-director at the General Directorate of Traffic has said that the formal regulation of personal transporter vehicles has been requested by policemen who struggle to respond to certain situations involving electric scooters. He added that a lot of officers believe they are having a negative impact on road safety, especially in bigger towns and cities.

The regulation considers personal transporters as vehicles with one or more wheels that are designed for one person and are propelled exclusively by electric motors, with a maximum speed between 6 and 25 kilometres per hour.

People on scooters will also be obliged to undergo alcohol and drug tests and would be fined between €500 and €1,000 in the case of exceeding alcohol rates or in the presence of drugs. The use of mobile phones and earplugs is also completely banned and users will be fined €200 if found to do so. More punishable offences are circulating at night without wearing a reflecting vest or a lighting system and more than one person at a time on the scooter.

If a minor is fined, it will be the parents or guardians who will be liable for the infraction committed by the person under 18 years of age.

YOU HAVE BEEN WARNED!

According to nanny cam footage from a home in Santa Monica, California, a little girl identified only as Vivi was having trouble sleeping in her crib last month.

The little girl can be heard calling to her brother Levi from across the room and asking if she could sleep in his bed with her security blanket and baby doll.

After taking a moment to consider his sister’s proposal, Levi accepts her offer and fetches a stool so she can safely climb out of her crib.

Vivi manages to climb over the railing only to realize that she forgot her baby doll. Luckily, her doting older brother was happy to assist.

(WATCH the video below) – Photo by RM Videos 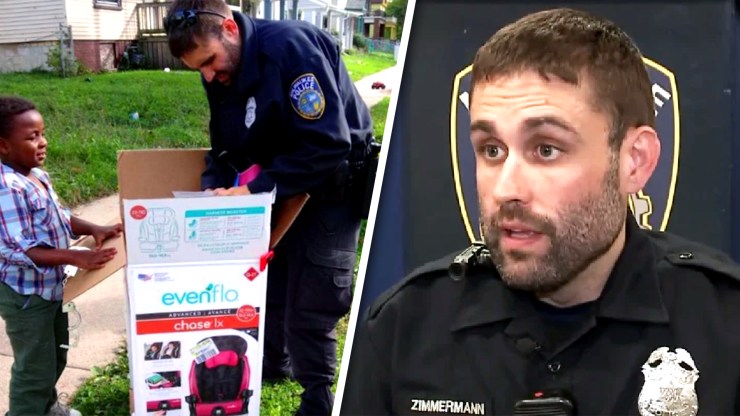 These firefighters went above and beyond the call of duty to calm an anxious little girl who had just gotten out of a car collision.

According to  the North Davis Fire District, Chief Hadley and Captain Lloyd were some of the first responders to arrive on the scene of the crash earlier this week.

Though none of the drivers or passengers were seriously injured in the collision, there was a screaming little girl who was “very scared” from the experience.

“After noticing the child was holding bottles of fingernail polish, these two officers started talking to her about her polish and asked her if she would paint their nails,” says the post.

“Within minutes, the child was calmly paining their nails and had forgotten about the accident she had just experienced.”

Though the manicure was not necessarily the tidiest paint job, they have to be praised the firefighters for their kindness.

It’s always exciting for a young child to be visited by the Tooth Fairy—so when this Wisconsin elementary school student lost one of his loosened front teeth amidst the chaos of a playground game, he was distraught.

The first grader from Gillett Elementary had been playing a made-up game called “ga-ga ball” with his classmates earlier this month when he suddenly found that his loose tooth had disappeared.

The youngster may have swallowed the wiggly tooth; or it may have simply fallen out onto the ground. Regardless, parents and teachers alike rallied together to scour the playground in hopes of finding the boy’s lost tooth—but to no avail.

The boy then approached Principal Curt Angeli for help. Upon listening to the boy’s story, Angeli knew just what to do: he wrote a letter to the Tooth Fairy as an official pardon for the tooth’s disappearance.

The note read: “Dear Tooth Fairy: Today, [my student] lost a tooth while playing outside at recess. Unfortunately, it was lost in our ga-ga pit, and despite the valiant efforts of an intrepid search team, we were unable to recover the tooth.

“As a trained principal and hobby dentist, I can verify that there is definitely a gap in [the student’s] teeth that was not there this morning when he came in. Please accept this letter as official verification of a lost tooth and provide the standard monetary exchange rate you normally use for a real tooth.”

Angeli then concluded the letter with an amusing note to the fairy, saying: “P.S. I am still waiting for the money for my wisdom teeth from 1987. Please remit as soon as possible.”

Since a photo of the letter was published by a Gillett Elementary School teacher, it has been shared hundreds of times by social media users praising the principal for going above and beyond the call of duty to comfort a distressed child.

Party Boothz provides a unique twist to any event with a photo booth to capture the memories of your special occasion. It is totally mobile and can be placed in any location. You can rent the photo booth for parties, weddings, anniversaries, corporate events, charity functions or any social gathering and you can arrange for your photos to be developed in colour or black & white plus you can choose the theme and they will arrange the rest.

This is a newly developed leisure area located on the banks of the Rio Fuengirola right beside the Sohail Castle just off the N340. There is a basketball court, table tennis area and a bike track which runs right along the river to the beach plus several play areas for the younger children.

This Spanish run company focuses on adventure tourism and events offering all sorts of activities including paintballing, rock climbing, hiking trails, abseiling, canoeing, water sports, horse riding and archery. There are various outdoor paintball zones in the Coin area plus a portable field consisting of inflatable objects. The company organises special activities for children too.

Located at Malaga Nostrum commercial park this go-karting track is an ideal spot to go for an adrenalin boost. Each session takes around 8 minutes. The track is open Monday to Friday 4pm - 12am and weekends 10am - 12am.